(Further contributions to this page are very welcome - please initially contact via /feedback .)

This is a 68 page document which was produced in 2001. It contains many interesting articles and photographs   /file/History/Gwernymynydd_Book.pdf 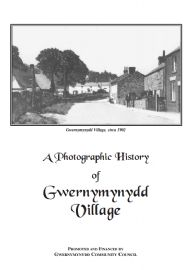 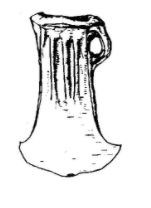 The current A494 follows a route across which has been used for thousands of years. In 1989 a metal detectorist discovered a group of Bronze Age axes in an area of rough ground on Hafod Moor. The finder and the landowner donated the finds to the County Council. The group consisted of four tanged axes known as palstaves; two later socketed axes and a bronze bi-valve (two piece) mould. They are dated to around 900-700 BC. The reasons for the burial are unknown. Such objects were often buried or thrown into lakes as ritualistic offerings, but it could alternatively have been a Trader’s or Founder’s hoard where objects are buried for trading or being melted down at a later date. Further details here. 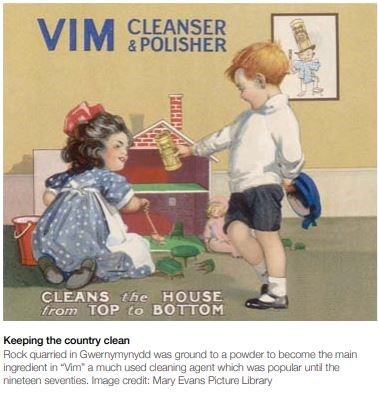 Little remains of the village's industrial history. Along with the neighbouring Loggerheads, it was a centre of lead mining (Cadole was originally "Cat Hole" - a lead mining shaft). The worked-out Cambrian limestone quarry was once owned by Lever Brothers of Port Sunlight, manufacturers of VIM, a scouring powder made from the silicaceous sandstone quarried here, which was ideal for the purpose. Lever's took over the Cambrian Works and Quarry in 1905 and stayed for half a century.

Click here for an 1890 document describing the geology of the Flint, Mold and Ruthin area. Lead mining in Gwernymynydd is covered in Chapter XIII pp 159-157.

Like many villages of the early 20th century, Gwernymynydd had a local benefactor, the Waln family of Fron Hall. Mold Hospital was given by them, some of its modern equipment, including it is thought, an operating table.

Following the end of World War I, the Walns, having lost one of their family members in action, were instrumental in having a cenotaph erected in Gwernymynydd, at the site of the old drinking fountain. This was at the roadside between Fron Hall drive and the Twmpath on the Mold-Ruthin road (now the A494). The water for the drinking fountain came from a spring in a field behind it. This water had always been considered pure, long before the days of the fountain. Local people believed that this was not surface water, liable to contamination, but water filtered at its source through the silica rocks above. In order to establish this, quantities of peppermint were put in the mine and sure enough, eventually the spring water tasted of peppermint.

The Village Field, adjacent to the village centre, and now legally protected from development by Fields in Trust, was a gift to Gwernymynydd residents from the Waln family.

The original village school, also adjacent to the field, was replaced by a new modern building in the 1950s (now the Village Centre). The old school was sensitively converted into an attractive house. Several features were retained by the family who bought it, including the school bell that hangs near the roof. It is currently used on Remembrance Day, when it is struck eleven times at the start of the service at the War Memorial in the grounds of the Centre. (A large stone marks the original site on the A494 from where it was removed for safety reasons.) 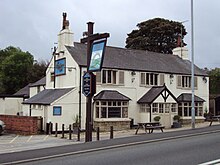 The Rainbow Inn was a well known feature at the top of Gwernymynydd hill for motorists heading west. It was demolished in 2019 as part of a new housing development. As a condition of the planning permission, in order to retain the landmark, the Inn building was replaced by housing of a similar appearance and footprint.